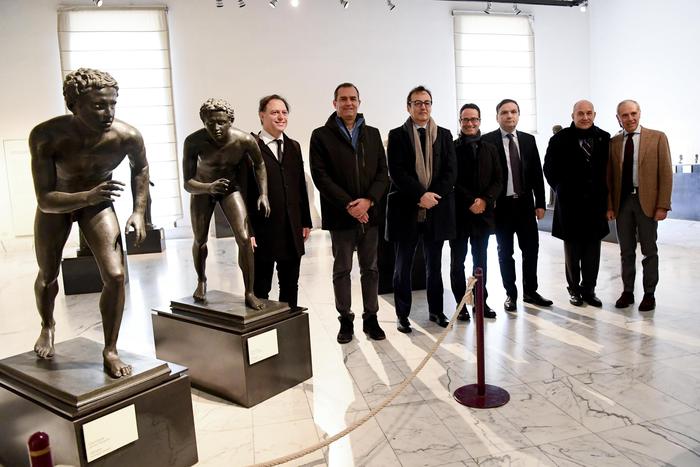 On February 4th, Naples’ Archaeological Museum (MANN) held the event “Telling the Story of Excellence” promoted by ANSA Press Agency. Among the participating guests, there was the Special Commissioner Gianluca Basile for Universiade Napoli 2019.

MANN Director Paolo Giulierini said the museum is also willing to loan some of the museum’s artifacts for display, as well as to promote the beauties of Campania in some key locations throughout Naples.
“As a museum we feel it is important to partecipate, not only in cultural life, but also in social life,” Giulierini said.
“We want to fight the battle personally, because there is no beauty without equity, and we can’t remain entrenched in an ivory tower. This is also how we are looking at sport and at the Universiade Games that will take place in Naples. Sport was present even in ancient Greece, and in our museum we bring together many examples of sporting activities from that time. In addition, as part of the excavation for the underground, a temple of the Isolympic Games was discovered in Naples. They had the ambition of being an Italian version of the Greek Olympics. This, to say that sport has always been a part of this city, since ancient times.
That’s why as a museum we are very proud to collaborate for the success of the Universiade and to promote the beauties of this region,” Giulierini said.
Universiade Commissioner Gianluca Basile said he welcomed “with great satisfaction” the collaboration with MANN which will work to highlight the beauties of Campania throughout the Universiade Games.
“We are giving it our all, for an edition of the Games that will have some of the highest participation ever, since many Countries have already confirmed. We are ready to accommodate the athletes in a way that only a region like Campania, with its beauties, is able to do,” he said. “We are receiving many requests from abroad,” he added, ” The museum, moreover, is located near the athletes’ village: A visit that will be a must for everyone”.