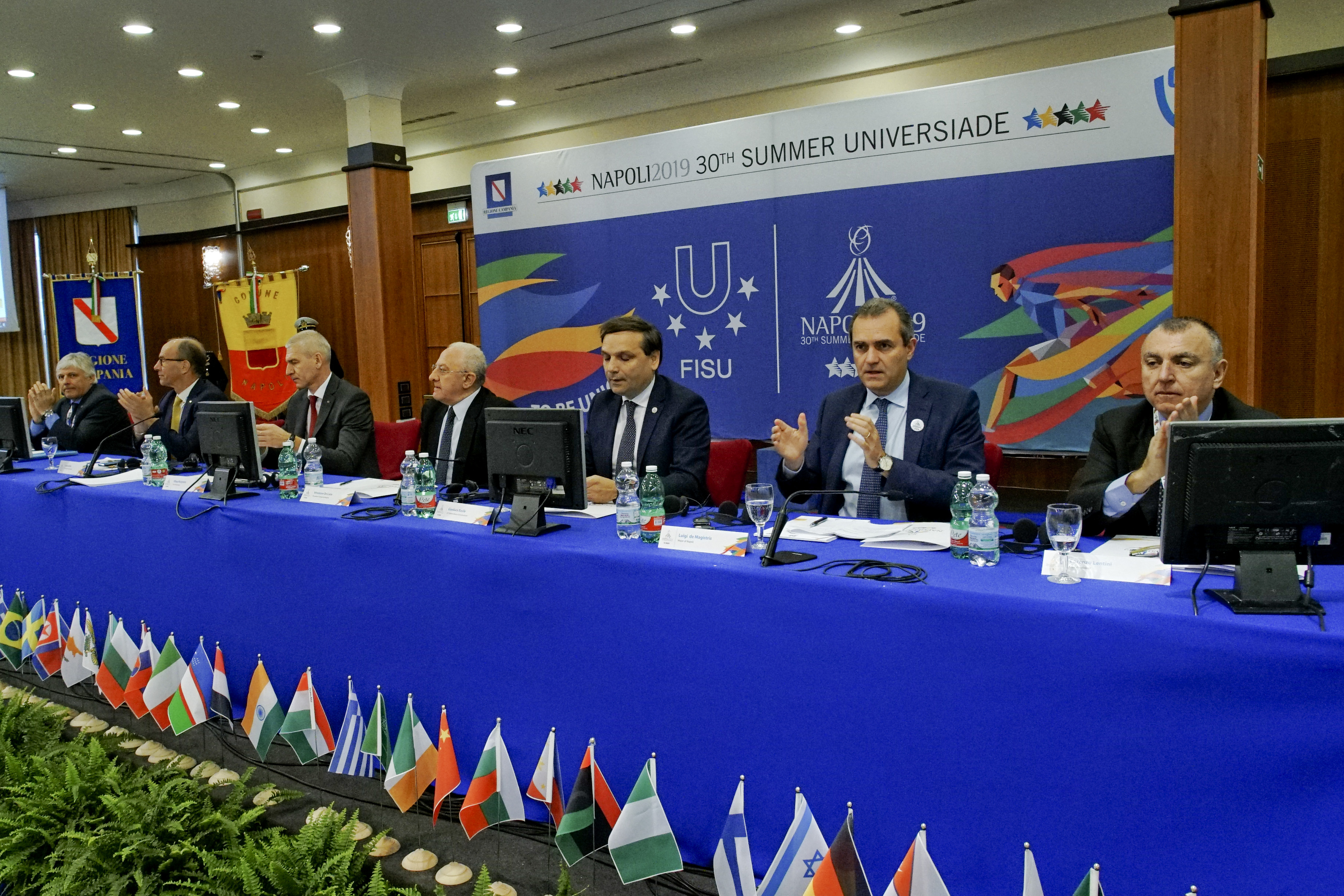 The three-day HoD Meeting will begin with around 60 heads of delegation coming from the 124 international university Federations which will take part from 3rd to 14th July in the 30th Summer Universiade Napoli 2019 in different local venues. The President of Regione Campania Vincenzo De Luca, the Extraordinary Commissioner Gianluca Basile, the President of CUSI Lorenzo Lentini, the President of FISU Oleg Matytsin and the Mayor of Naples Luigi de Magistris were present this morning at the Stazione Marittima in Naples.
"We wanted the Universiade at any cost - said the President of Regione Campania Vincenzo De Luca - by making an enormous effort, investing directly or indirectly 270 million euros to promote the image of Naples as one of the greatest capitals in Europe and in the world, and the image of Campania as a territory rich in culture and art treasures, including Pompeii, the most important archaeological site in the world. We are sure that the Summer Universiade will be a great success". The governor announced that the Universiade Napoli 2019 will be named after Pietro Mennea, in the 40th anniversary of the historic 200-meter world record achieved by the Italian sprinter in the Mexico City edition.
The Extraordinary Commissioner, Gianluca Basile, then took the floor: "We are working hard to show the best side of Naples and Campania. The young people of our region will have a unique possibility of dialogue and exchange with international students".
"60 years after the first edition - stated the President of CUSI Lorenzo Lentini - we wanted to celebrate the Universiade in Italy, in the South, and in Naples, in the name of Primo Nebiolo", the Italian sports manager who conceived and organized the Turin first edition in 1959. The Mayor of Naples, Luigi De Magistris, highlighted that Naples and Campania "are ready to instill humanity, beauty, culture and hospitality. It will be an event of happiness for everyone". The President of FISU, Oleg Matytsin, recalled: "Yesterday I met the President of Regione Campania Vincenzo De Luca and he made me understand that there is the political will to make a successful event. There will be a lot of work over the next months. But much has already been done, it must be recognized," he added.
Visits to the venues, which are about to be renewed or restructured, will continue tomorrow in the other provinces of Campania: the Palasele in Eboli, the Atlethes Village in the University Campus of Fisciano, the Arechi Stadium in Salerno, the Paladelmauro in Avellino and the Royal Palace in Caserta. In the afternoon the delegations will visit the Palatrincone in Pozzuoli, the former NATO base in Agnano and the shooting field in Cavalleggeri. The route will end with a stop at the Circolo Italia.
The photogallery of first day Hod Visti here: link